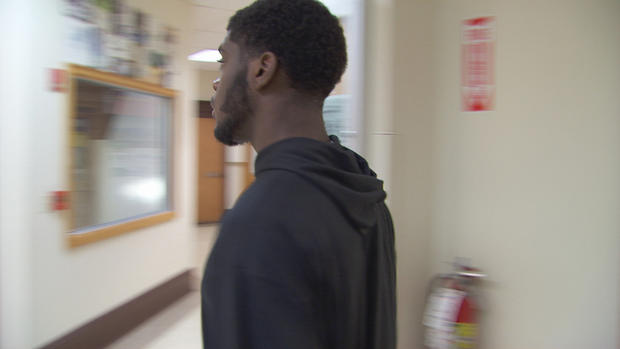 The hoodie is the ultimate in street style, worn by urban teens everywhere. It's also a symbol of racial profiling and a garment at the center of the national debate over race and justice. But an inner city boys school in New Jersey is reminding us who invented the "hoodie" in the first place -- Benedictine monks.

On 60 Minutes this week, Scott Pelley profiles St Benedict's Prep and its charismatic headmaster, Father Edwin Leahy, who walks the halls of the school in a traditional black, hooded monk's habit. A Benedictine monk, Leahy attended the high school himself and later fought to save it in the 1970s, as the city around it crumbled.

When he took over, Leahy decided that the students themselves, most of whom come from low-income black and Hispanic families, should be entrusted with running the school. "It's a population that never gets to have control," Leahy says.

That changes once they get to St. Benedict's, Pelley explains. "I have been, unfortunately, in some American high schools where you could feel a palpable sense of menace in the hallways. Not here," he tells Overtime editor Ann Silvio in the video above. "Every one of those boys seemed to be looking out for the guy next to him, to make sure that that guy stayed out of trouble and was on a road to success."

That road is a long one, starting with a rite of passage freshman year - a four-day, 55-mile hike along the Appalachian Trail led by upperclassmen.

But the students are motivated by each other and by a distinctive reward -- the right to wear the school colors. The students can't wear the black hoodie the upperclassmen wear, which is modeled after a monk's habit, until they complete the trail and a range of other requirements. Wearing it symbolizes full membership in the school.

It's an honor that comes to symbolize the transformation of the boys themselves. "With the rest of the world being concerned about people walking around in hoodies, especially people of color, well, at St. Benedict's, you have to earn the hoodie," Pelley says.

And that's no easy task. The trail is "a sadistic, awful, terrible place that's rocky and buggy and snakey and hot," says Campanile. "And you look like a beaten army when you're walking with these kids. Everyone is just exhausted and angry and irritated."

But then something shifts, he says. "There's a key point about halfway through the second day," he says, when the boys climb a mountain. "When they get to the top, they have this commanding view. And in that moment, they see how far they've come. And you see it click. The guys suddenly relax.'"

By the end of the hike, the students have accomplished something harder than they ever imagined. "It's more than just a walk in the woods," Campanile says. "It's really kind of a turning point in their lives."

One student, Devionne Johnson, was overcome with emotion as he huddled with his classmates at the end of the hike. "I really want to let you all know that I love all y'all," he says. "Y'all my brothers."

That moment caught Campanile's attention and he asked Johnson about it in the parking lot as they headed home. "It was really hard, but we all pushed through," Johnson says. "That's what matters."

"What'd you learn about yourself?" Campanile asks.

Learning to lead is part of the ethos of St. Benedict's, and so is looking out for your fellow students. That sense of community is obvious in the school's early morning convocations, where all 550 students gather in the gym to sing songs and pray.

"There's something very special happening," Campanile says. "Young guys, they don't want to touch each other. But in convocation, that morning gathering, these fourteen-, fifteen-year-old, sixteen-year-old boys had their arms around each other."

Camaraderie is at the heart of St. Benedict's, Pelley explains. "That's what you have in that school, boys taking care of each other," he says. "It is a remarkable ethic of love and affection that they have for one another."

The video above was originally published on March 20, 2016 and produced by Ann Silvio and Will Croxton, and edited by Will Croxton. Sarah Shafer Prediger was assistant editor.