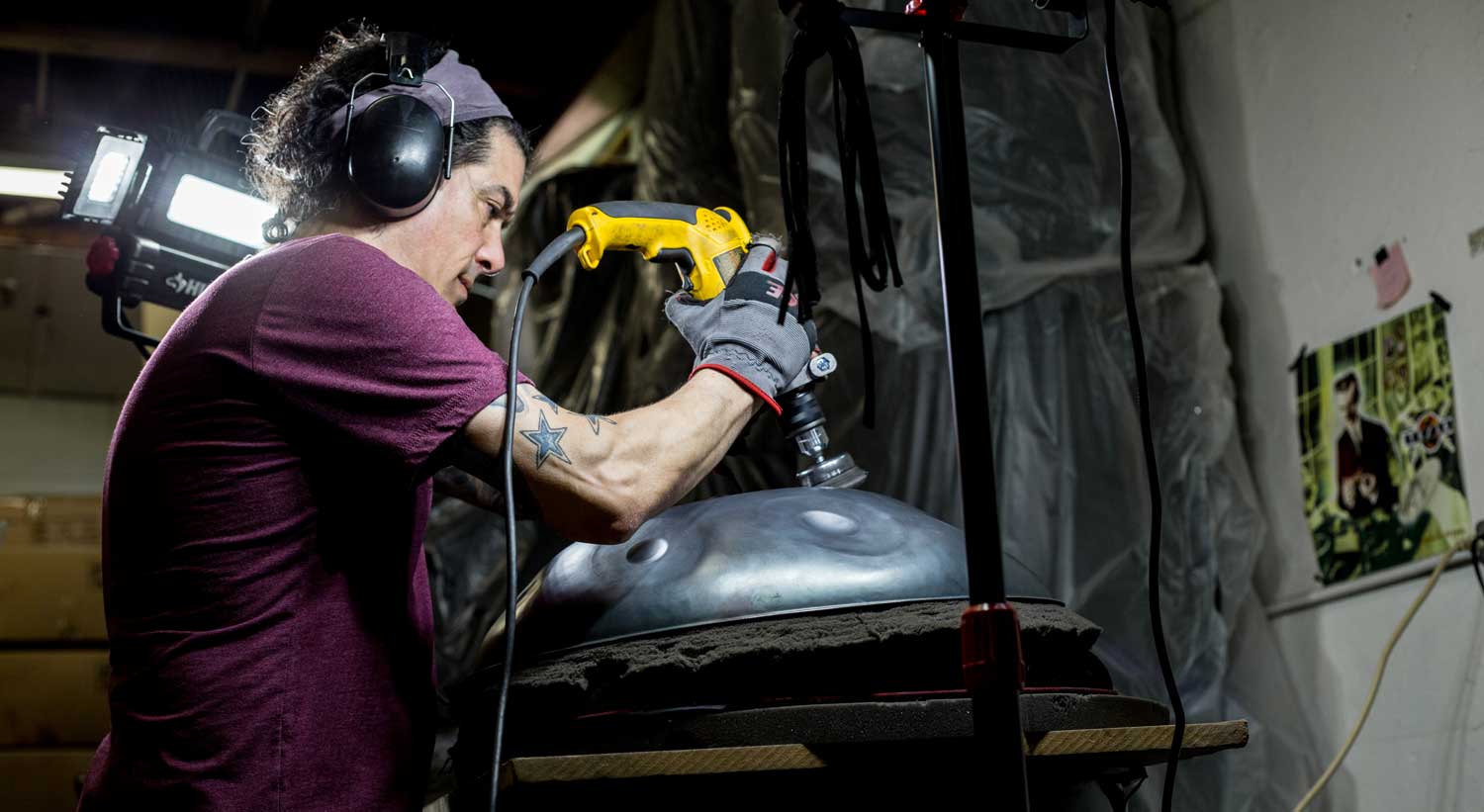 Before we can discuss handpan styles and manufacturers, we need to cover some basic terminology. The handpan is a relatively new type of instrument in the idiophone family invented around the turn of the century (though some of the instruments that inspired it are thousands of years old). Idiophone describes instruments that create sound by the vibration of the whole instrument rather than by strings or membranes. As is common with new inventions, a variety of terms emerged to describe the same type of instrument. Ultimately, though not without controversy, handpan has become the predominant term.

Learn more about handpan history and controversy in our post, Handpan vs Hang Drum.

Handpan – a musical instrument made from two metal half-shells that are glued together to form a resonant hollow chamber. Each handpan is tuned to a fixed set of notes organized around a center tone. Handpans are played by gently tapping the tone fields with your fingers. The resulting music is characterized by dreamy and hypnotic sounds. The term handpan was coined by Kyle Cox in 2007. All handpans are made by shaping an uncut sheet of steel and then tuning the internal tensions of isolated areas on the sheet to vibrate in a similar way as a drum head.

HangⓇ – a trademarked term for the instrument that inspired much of the handpan community. The HangⓇ is a sound sculpture developed in 2000 by PANArt, an instrument manufacturing company based in Switzerland.

Hang drum – a non-trademarked variation of HangⓇ that should be avoided, mostly because it implies that handpans can be struck like traditional drums, which could compromise the instrument’s delicate tuning.

Pantam – a generic term synonymous with handpan. The term pantam originated in the early days of the HangⓇ when an Israeli distributor began using the term instead of HangⓇ due to language-based pronunciation difficulties.

SpacedrumⓇ – a melodic metal percussion handpan created and manufactured by the French company Metal Sounds. While SpacedrumⓇ is a trademarked product, many handpan players also refer to handpans as space drums due to their early arrival on the market.

Tongue drum – a hollow tank with cut tongue-shaped incisions. When the tongues are hit or struck with a mallet, a bell-like sound is produced. Tongue drums, also known as tank or hank drums, are typically made from steel, though their predecessors were also made from wood. Although many tongue drum builders refer to their instruments as both handpans and hang drums, they are actually neither. There are no handpans made by cutting the steel into tongues. While both handpans and tongue drums are made from steel in a pod-like shape and sometimes have similar note layouts, they have little else in common.

Electric handpan – an electronic percussion instrument meant to mimic the sounds produced by handpans. Electric handpans are not actually handpans but rather electronic programs that allow users to experiment and practice with pre-recorded sound combinations and scales.

Sound sculptures – a generic root term for any art form, including handpan instruments, that produces sound. Sound sculptures vary in size and scale. Check out some of the larger sound sculpture installations erected over the past few years.

The actual type of handpan is often dictated by its size, composition material, number of notes, and scale. Learn more about handpan construction and handpan scales.

The handpan-maker community is tight-knit, in part due to the collaboration that has furthered this emerging musical art form. The manufacturers listed below are mostly small operations that originate from a single tuner. Their origin stories are similar, mostly beginning with exposure to the original Hang, which has resulted in a multitude of quests to craft and shape the singing steel instruments of today.

Many of the handpan makers below have collaborated on instruments and played together. Several began as apprentices in one shop and have since begun companies of their own.

Scroll to the very bottom of this post for our list of 6 handpan crafters to explore further.

Founded by Josh Keegan and Jarred Houseman, Arcana Musical Instruments resonate with the intent behind their namesake: secret knowledge and mystery.

Aura Handpan specializes in crafting handpans from raw, nitrided, and stainless steel. Founder and primary tuner Jon Antzoulis began his journey initially by tuning a pizza pan. By 2014, he was tuning the singing steel.

Jacob Lee founded Axiom in 2013 after almost giving up on music altogether. A profound experience with the magic of handpan music put Lee on a new path to build the instruments and a company based on the truths of his experience.

Colin Foulke is best known in the handpan-maker community for developing, documenting, and sharing a hydroforming method of handpan construction.

Stevan Morris began HAMSA in 2015 after apprenticing for two years under Dave Beery. Stevan is also the founder of the Pantasia Handpan Gathering in Joshua Tree, CA.

Harper’s Handpans is a family operation led by Jeremy Harper. Their approach to handpans and handpan construction is nothing short of poetic, as they claim to “handpan building is a search for balance, the beauty of living can be found in the unspeakable nuance of all things, and there is joy in sharing music with others.”

Founded in 2017 by David Galleher (aka Chef D), Makai handpans are known for their brilliance and resonance. The quality of their instruments is a combination of unique techniques distilled from other reputable handpan makers in combination with David’s own ingenuity.

Pansnap is the manufacturer of the Solaris handpan, which is crafted and tuned by Bryant Evangelista.

Pantheon Steel was the first handpan maker in the United States and, arguably, the second in the world. They emerged in 2009 after founders Kyle Cox and Jim Dustin developed their first Halo Handpan.

That’s us! Saraz began in 2011 after founder Mark Garner bought his first handpan, a Halo from Pantheon Steel. Mark was hooked, and the rest is history. Learn more about Saraz’s timeline. At this point, Saraz has been around longer than 98% of handpan makers today and has helped pioneered the art form.

Spirit Handpans is a women-led handpan manufacturing company immersed in the spiritual and healing musical traditions and handpan music. Rebecca Dancyger founded the company in 2016. She has also collaborated on and tuned a few Saraz Handpans.

Founder, builder, and tuner Sean Beever got involved with tuning steel at the young age of 12. He began tuning handpans in 2013, and eventually crafted the Iskra sound sculpture.

Built and tuned by Josh Rivera, founder of Pure Sound Pan Wax and Rivera Steel Tuning. Josh is a highly skilled tuner after working at Saraz for 4 years and retuning many instruments from other builders. He is also our top recommendation for retuning quality instruments.

Since handpans have emerged as a music and art form, tuners, crafters, and makers have emerged across the globe. In fact, the emergence of handpan music across different cultures and countries worldwide is part of what makes handpan music so compelling — there is a global resonance!

The following is our list of the top international handpan makers and manufacturers.

AYASA Handpan – Based in the Netherlands, Ralf and his crew have engineered a great instrument on great shells, which are also available for other builders to use. We build all of our Enthusiast Series Saraz on Ayasa Shells.

Echo Sound Sculpture – Based in Switzerland, Ezahn was one of the earliest builders and one of the first to push the boundaries of tuning shoulder tones.

Pantheon Steel – Based in Missouri, Kyle and Jim created one of the first alternatives to the HangⓇ. They also revolutionized the way that a shell could be formed while creating an instrument with a novel tone and timbre. Kyle, who was a talented steel pan tuner before developing the Halo Handpan, is one of the most experienced handpan tuners and builders alive today. Pantheon Steel continues to push the technological boundaries of the craft.

Saraz Handpan – We love our own instruments, of course. We have always focused on quality over quantity and been blessed to enter this art form very early in its short history. We are one of the only builders to offer instruments formed from drawn shells and fully hammered shells. We produce instruments in both low carbon steel and stainless steel across four sizes for ideal internal resonance which allows us to offer one of the largest available scale lists on earth.

Yishama Pantam – Based in Israel and founded by Yonatan Bar, Yishama is best known for pushing the limits of high quality “mutant” style note layouts.

WHERE TO BUY HAND PANS

You can purchase handpans independently from each of the makers and manufacturers listed above. Many have waiting lists for custom orders but will also have some scales available for purchase at any given time.

Also, peruse currently available Saraz handpans and check out our custom series. You can sign-up for our newsletter to stay tuned on recently available instruments and get a discount off your first handpan order.

Finally, our friend, customer, and handpan musician Sylvain Paslier offers handpans from Saraz and from many of our favorite makers on his website.